"We Don't Have Real Representatives to Vote For" 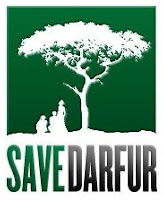 Jerry Fowler and Mark Lotwis of the Save Darfur Coalition recently traveled to Sudan to observe the humanitarian situation in this war-torn country. Here are some snippets from their firsthand report, issued yesterday.

IDPs [Internally Displaced Persons] named security as their number one concern. Many complained of being subject to violence when leaving camps — not just women risking rape but both men and women being attacked when they go to the market or work in the cities. We often heard descriptions of the most recent attacks and that this violence was on the rise, not decline.

Despite Sudanese government claims that IDPs were returning to their villages in large numbers, we found little evidence of this. While there may be some returns and some seasonal migration to farm, IDPs said the main reason they cannot return home is because of a lack of security, and in some cases because other people were occupying the land they once lived on. One leader said, "When we can travel for two days without being attacked, we will go with no one telling us."

While distribution of food aid has been picked up by the World Food Programme and some new partners, provision of adequate water supplies appeared to be more 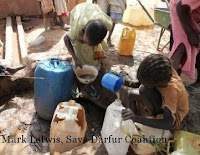 problematic, exacerbated by poor rains last year. At one camp, water was shut down at noon, and hand pumps were broken. In multiple camps we visited, people lined up for water, with rows and rows of empty jugs waiting to be filled. We saw unsanitary conditions around some pumps where spilled water runs off and mixes with animal waste — and children run around in bare feet.

We asked IDPs what they thought about the upcoming elections. The overwhelming majority of IDPs said they did not register and therefore will be disenfranchised in the election. Some said they didn't bother because "we don't have real representatives to vote for," while others feel that free political conditions do not exist. The ongoing state of emergency and level of violence leave doubts about a safe environment for candidates and voters in Darfur. When asked whether he feared for his life, one tribal leader told us, "I lost my family, I lost my country, I may lose my life." But he was resolved to carry on advocating for a just and lasting peace.

I hope all Americans of goodwill are just as resolved to continue working for peace in Darfur.

Posted by Justin Soutar at 3:55 PM