A Hero We Can Be Proud Of 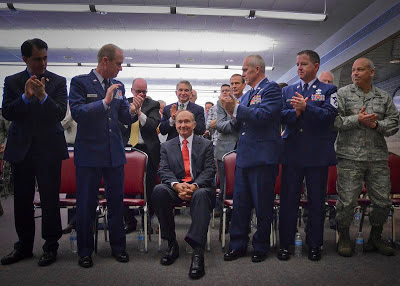 I know the man seated in the center of the above photo and am honored to call him my friend. His name is Captain Guy Gruters, and he served in the U.S. Air Force as a fighter pilot during the Vietnam War. After flying more than 1,000 successful combat missions, he was shot down and captured by the North Vietnamese in 1967. He spent the next five and a half years enduring the horrific nightmare of a Communist prison camp, including torture, starvation, and psychological pressure, but he refused to betray his country or his honor. He was finally released and returned to the United States in 1973. Now he travels all over the country giving talks about how his Catholic faith strengthened him to persevere through this almost unimaginable trial. His amazing story and his powerful testimony always moves people to tears as well as applause. In the photo above, Capt. Gruters receives a standing ovation from Governor Scott Walker of Wisconsin (far left) and top military officials from the National Guard following a recent talk in Milwaukee.

I am very proud of Captain Gruters and deeply grateful for his service to our country. He offers an excellent role model for today's young members of the United States armed forces. He reminds us that faith in God is what inspires true patriotism and heroism.

For more information about Guy Gruters, check out the following link from the U.S. Air Force website: