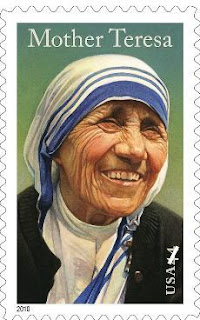 Today is the one hundredth anniversary of the birth of Mother Teresa. Her powerful witness of Christ's love for the poorest of the poor has touched the hearts of all people of good will throughout the world.

Blessed Mother Teresa of Calcutta, pray for us.
Posted by Justin Soutar at 10:04 PM No comments:

August 11, 2010: Four Republican outsiders to Washington, D.C. have now been nominated to the U.S. Senate: Ken Buck in Colorado, Rand Paul in Kentucky, Marco Rubio in Florida and Sharron Angle in Nevada.

Also in Arizona, longtime Republican Senator John McCain has been nominated for a fifth term. He had lost the 2008 presidential election to Barack Obama.
Posted by Justin Soutar at 4:44 PM No comments:

A couple weeks ago, I read in Astronomy magazine's e-newsletter that the Perseid meteor shower was going to peak on August 12. In all my previous attempts to observe meteor showers, I'd met with bad luck. However, I decided to go out and give the Perseids a try, since I had a mostly clear sky the evening of the predicted peak.

In one hour, I saw six meteors zip across the sky quick as a flash, all radiating from the direction of the constellation Perseus. Five of them left vapor trails in their wake that lingered for up to a second. Four of them were as bright or brighter than the planet Jupiter. In addition to these bright and fast meteors, I observed at least ten of the slower, dimmer kind track across the sky. It was like the sky was crawling with meteors. There were periods in which I couldn't go for more than a minute or two without seeing one. It was great fun!

Praise God for a thrilling celestial fireworks show.
Posted by Justin Soutar at 8:41 PM No comments:

These eruptions are associated with sunspots, magnetically polarized regions of the sun's surface that are ironically cooler than the surrounding surface area, often having temperatures of only 10,000 degrees F. A coronal mass ejection sends a concentrated stream of electromagnetically charged particles into space that can travel for many millions of miles. When these particles collide with earth, they interact with the planet's magnetic field in the exosphere --the outermost layer of earth's atmosphere -- high above the north and south poles, generating beautiful displays of colored lights in the polar night skies known in the Northern Hemisphere as the aurora borealis, or northern lights. A large solar flare may even cause the northern lights to be seen at temperate mid-northern latitudes, although the display will be significantly dimmer and more subtle here.

Such bursts of solar energy are a regular feature of the sun, but every so often an unusually powerful burst will occur. NASA's Solar Dymanics Observatory, a spacecraft launched to study the sun, recorded four such bursts on August 1. These coronal mass ejections, traveling at speeds of over 1 million miles per hour, reached the earth three days later on the evening of August 4. The result was a spectacular aurora borealis display over earth's northern polar regions. The show extended as far south as the 45th parallel of latitude, and was seen by people in the northern United States.

Because coronal mass ejections occur at irregular intervals, astronomers cannot predict their occurrence. However, a large solar flare is an event typically observed by astronomers once
every one and a half years. Previous such events occurred in 2008, 2005 and 2003.

When you hear about a large solar flare in the news, check the night sky in the days following the event to see if you can see an auroral display. Be sure to observe from a location with a dark sky and an unobstructed northern horizon.

I myself have seen the aurora borealis on two separate occasions from my home in Ohio. The first was in October 2003, when I saw a green glow above the horizon and observed subtle red curtains of light waving high in the northern sky. My second sighting was of an even more subtle event in May 2005, when I merely noticed that the usual yellowish-white glow of distant city lights bore a greenish tinge. Although neither show was spectacular compared to the displays visible in polar regions, I was thrilled to be able to see them because of their rarity at midnorthern latitudes and because they were the first two times I ever witnessed the aurora borealis. I missed out on seeing the most recent extraordinary auroral event because I did not live far enough north to see it, but I will keep my eye open for future such events.

Copyright © 2010 by Justin Soutar. All rights reserved. This article may not be reproduced without the written permission of the author.
Posted by Justin Soutar at 10:25 AM No comments:

I do enjoy coin collecting, but...

...not at the price the Danbury Mint is asking. They want $20.00 for a single roll of twelve uncirculated America the Beautiful state quarters. That's $1.67 apiece or more than six times the face value of the coins. The U.S. Mint is issuing five of these state quarters a year, and the Danbury Mint would like to sell me a roll of twelve quarters for each state, every year as soon as they come out until the whole series is minted. If I accepted this offer and agreed to stick with the program (I could bow out at any time), I would end up spending a total of $1,000.00 plus shipping and handling for the privilege of owning fifty gleaming state quarter rolls, plus a bonus quarter in a resealable capsule for each state and a nice box to keep them in. The question I have to ask is: Would this really be worth it? Not for me. At that price, I don't want thirteen brand-new quarters from each state. I'd rather just get one quarter from each state. The Danbury Mint wants to sell me twelve apiece so they can make a fortune on this series.

Some might say that this is a sought-after coin series and I should get in on the ground floor. All the same, I can't bring myself to pay $100.00 for $15.00 worth of coins. It may also be true that the market value of these limited edition coins will skyrocket twenty or thirty years from now. Nonetheless, even if my collection were to go up ten times in value and I were to sell it for that much, I would not earn much more than the Danbury Mint originally charged me for it. Bottom line: This is a great deal for the Danbury Mint and a ripoff for customers. If I want a roll of these shiny new quarters, I can get it at face value from the bank.

By the way, I haven't even collected all fifty of the recent state quarter series yet, which is my favorite American coin series.
Posted by Justin Soutar at 4:00 PM No comments: