This past February, shortly after my father Daniel and I celebrated our fifty-eighth and thirtieth birthdays, respectively, my Dad was hospitalized and diagnosed with Stage IV colon and liver cancer. Although my Dad's health had been slightly and mysteriously declining during the previous year or so, this discovery nonetheless came as a shock to me and my mother and sister, because my Dad had always been the picture of health throughout his life. Promptly transferred from our little community hospital to the big one down in Roanoke, my Dad quickly consented to undergo emergency surgery to save his life; that went well, and to the surgeon's surprise, he had no pain afterwards. Always one to take charge of his own life as far as possible, my Dad unhesitatingly dismissed suggestions that he receive palliative care at home following the surgery. And while he briefly considered undergoing standard chemotherapy and radiation treatment, he ultimately rejected this course of action as imprudent given the undesirable side effects and the well-documented (but, for obvious reasons, not well-publicized) abysmally low success record of such treatment.

In place of this, my Dad proceeded to organize and wage his own vigorous, multi-pronged battle of diet, exercise, and nutritional supplementation against the demon that threatened to slay him. Based on research and advice obtained from his surgeon and several other health experts, my Dad's unique strategy included iron and protein supplementation, drinking freshly made carrot juice (which he forced himself to make daily despite his low energy levels), a strict sugar-free diet, almost daily half-mile to mile-long walks around the property, and a resolute determination to win this thing. And for a while, it looked like he would do just that. Despite some difficult adjustments, he recovered well from the surgery and was soon able to drive again. He made the one and a half hour trip to Roanoke by himself for the follow-up appointment with his surgeon, who was not only delighted with the progress he was making, but eager to learn more about alternatives to the standard cancer treatments.

In mid-May, however, we received the first clear warning sign that my Dad was actually losing the battle. That month, a CAT scan revealed that the cancer had grown and was now spreading to other parts of his body. Our good doctor friend looked at the scan and said that my Dad had two weeks left to live. At this point, where a weaker man would have surrendered to the inevitable and laid down to die, my Dad redoubled his efforts to defeat the cancer, praying for guidance and researching expensive alternative treatments. God led him to a remarkable product called Haelan 951, a bitter-tasting fermented soy beverage that's prescribed to treat protein calorie malnutrition. Within a few days of starting on this drink, he was feeling better and had more energy, and a few weeks later, he noticed that some of the tumors that he could touch and feel with his hand were shrinking. Two months later, my Dad was still alive, although his energy was steadily declining, his walks were getting shorter and less frequent, and he was gradually losing his ability to do things for himself. Interestingly, his last CAT scan in mid-July indicated that the cancer had expanded only slightly during the intervening two months. I'm convinced that the Haelan contributed significantly to slowing the growth of the cancer and enabling my Dad to live for three more months.

Towards the end of July, my Dad became bedridden and his breathing became more and more labored. During those final three and a half weeks of his life, which were very painful and difficult, my Mom and I were blessed with the opportunity to serve Jesus in disguise. It's one thing to talk about serving Christ in the poorest of the poor as a nice theory; it's another thing to actually do it yourself. It's certainly not easy to do, but it does have its rewards, even here on earth. As my ever-independent Dad progressively lost the ability to do things he'd always done for himself--which was initially frustrating for him but to which he gradually resigned himself--he'd be so grateful for the slightest thing my Mom or I could do to help. Whether it was bringing him a bowl of cereal or a glass of water or adjusting his pillows or whatever, he would look at us with his penetrating eyes and say, from the bottom of his heart, "Thank you--so much." That sincere gratitude helped make it all worth while. And furthermore, this opportunity to serve Christ in my Dad through simple works of mercy brought a mysterious joy to my heart.

On August 7, my Dad, being a good practicing Catholic, received the sacraments of Penance, Holy Eucharist, and Anointing of the Sick from the hands of our beloved pastor, Father Joseph Wamala. My Dad's struggle finally ended peacefully, and he went to be with the Lord late in the afternoon of August 15, the Solemnity of the Assumption of the Blessed Virgin Mary, his spiritual Mother to whom he had been devoted throughout his adult life.

Like so many others, although he fought valiantly, my Dad ultimately lost his battle with cancer. But from a spiritual perspective, my Dad was victorious, because he died in the state of sanctifying grace. I'll always treasure those last six months of his life that he was able to spend with me, my Mom, and my sister thanks to his determination to keep fighting the good fight--months during which we played games and watched movies together on Sundays, months during which we went to Mass and grocery shopping together, months during which I continued to learn from his seemingly inexhaustible fountain of good example and advice.

Although I'm not sure why God decided to take my Dad home to himself earlier than we (and he) reasonably expected, I trust that Our Heavenly Father knew what he was about when He allowed this to happen, that He allowed it to happen for some good reason, and that my Dad's early death is somehow a key part of His master plan for my life. Furthermore, my Catholic faith assures me that, whether his soul is currently in Heaven or Purgatory, my Dad is spiritually united with me and my living loved ones through the Communion of Saints, and that all of us who die in the state of sanctifying grace as he did will someday be permanently and irrevocably reunited with him in the unimaginable glory and joy of Heaven.

In the meantime, please keep my beloved Dad, along with me and my loved ones, in your prayers.
Posted by Justin Soutar at 2:21 PM 1 comment: 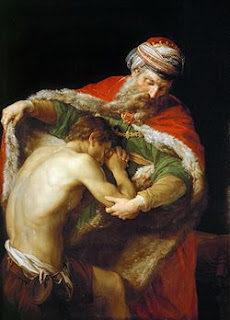 “It is the heart of our Father, God is like this: he does not tire, he does not tire! And for so many centuries He has done this, with so many apostasies, so many apostasies of the people. And He always returns, because our God is a God who waits. From that afternoon in the earthly Paradise, Adam left with a penalty and a promise. And He is faithful, the Lord is faithful to his promise, because he cannot deny himself. He is faithful. And so he waits for all of us, along the history. He is the God that waits for us, always....

“God waits and also God forgives. He is the God of mercy: he does not tire of forgiving us. It is we who are tired of asking for forgiveness, but He never gets tired. Seventy times seven; go forward with forgiveness. And from a business standpoint, the balance is negative. He always loses: he loses in the balance of things, but conquers in love....

“He will make a feast for you. 'His splendor shall be like the olive tree and his fragrance like the Lebanon cedar.’ The life of every person, of every man, of every woman, who has the courage to draw close to the Lord, will find the joy of the feast of God. So, may this word help us to think of our Father, the Father that waits for us always, who always forgives us and who feasts when we return.”

Posted by Justin Soutar at 12:05 PM No comments: