This past weekend we enjoyed our first good snowstorm of the season, which brought about 10 inches of snow. 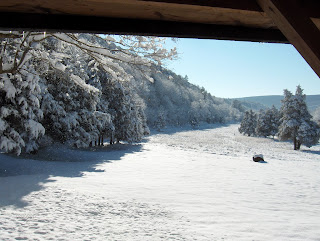 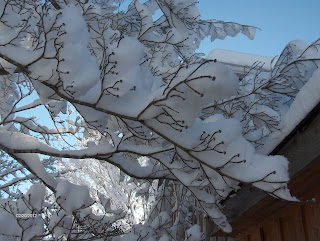 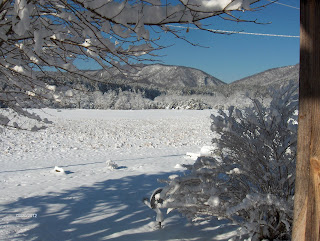 Posted by Justin Soutar at 11:31 AM No comments:

Just a Few Thoughts About the Presidential Race

I haven't turned out many articles lately because I've been occupied with the Mother Teresa book and some other things. Nonetheless, I've been thinking about and reflecting a little on what's going on in our country lately, specifically the 2012 race for the presidency which is heating up right now. That's where a blog post comes in: it's a great place to share your random thoughts on a specific topic without having to organize them into a formal article. So here I'd like to share just a few of my thoughts on the presidential campaign.

When I checked the news this morning, I saw the story about former Massachusetts Governor Mitt Romney winning the Republican primary in Nevada. The mainstream media is making it look like Romney has already clinched the nomination and has "crushed" his rivals. Even before the Nevada election, they produced a poll showing Romney favored by 50 percent of likely voters and Gingrich by 25 percent--a 25-point difference between the two candidates. In the actual election, Romney won 44 percent of the vote, Gingrich 26 percent. That's only an 18-point difference. I get the sense that the mainstream media is pushing Romney and trying to ruin the other contenders, especially Newt Gingrich but also Ron Paul and Rick Santorum. Why? Well, for one thing, I think it's because Mr. Romney is a great friend of the Establishment--what our founding fathers called the "moneyed interests." For years now, major corporate enterprises in this country have been manipulating our government (both parties), the economy and the media to promote their own interests. The American people are fed up with this corrupt setup and they want real change, hence the Tea Party and Occupy Wall Street movements. But the Establishment hangs on tenaciously and won't give up without a fight. Its members have come up with a pretty smart plan to keep their sinking enterprise afloat: Hey, lots of Americans are unhappy with President Obama, so let's promote a Republican alternative to Obama who is a friend of ours. That way, whether he gets elected or Obama gets reelected, we'll be safe. On the other hand, Gingrich, Paul, and Santorum are friends of the American people, and each represents a threat to the Establishment in some way. All three are staunchly pro-life and anti-Obamacare, which threatens the abortion, pharmaceutical and insurance industries; in addition to that, Paul would abolish the Federal Reserve and income taxes, dramatically downsize the federal government, and end our foreign wars, which would utterly destroy the Establishment. Paul and Gingrich have huge followings, so the mainstream media, which is controlled by the Establishment, is going to do everything it can to try to keep those men from getting anywhere near the White House.

Another reason Romney gets so much media attention is because he is very media savvy and has a lot of money to spend on marketing himself. This guy is not just a politician; he's a practiced businessman, a self-made multimillionaire, and he knows how to sell a product and make mincemeat of the competition. In this case, he's trying to sell himself to the American people as the best candidate for president, spending tens of millions of dollars on glossy ads to exalt himself and push his rivals out of the way. He's very slick and polished. Romney is a rich man, but I have serious doubts about whether he is an honest man. Please forgive my frankness, but Romney seems fake to me. His Establishment connections (notably the one with Obamacare) make him a definite enemy of the Tea Party. As a pro-life president, Romney would be a significant improvement over Obama, but beyond that, I don't see how his presidency would differ much from that of Obama's. When you get down to the important issues facing our country, Romney is surprisingly vague on many of them. His plan for rebuilding our economy, for instance, remains a mystery to me. (Perhaps I need a course in Romneynomics--can anybody out there help?)

On the other hand, Ron Paul has a fine reputation as an absolutely 100 percent honest and consistent man, a man of integrity and truthfulness, who is not part of the Establishment and never has been--and that's saying a lot in today's corrupt political environment. Predictably, that dooms him to chronic mainstream media blackout. However, because of his reputation, Paul still manages to raise millions of dollars through the use of alternative media, especially the Internet. I don't agree with all of his issue positions, but I think a Paul presidency would be enormously beneficial for our country, getting us back to the Constitution and in line with what our founding fathers intended. The reality, though, is that he probably won't win the Republican nomination for president getting "only" 15 or 20 percent of the primary vote in each state.

I think our best choice this primary season is to get behind Newt Gingrich for president. Although he has a few Establishment connections, he is an honest and consistent man like Paul, which can be verified by checking his thirty-year-long voting record. He is a representative of the Tea Party on the issues. He would defeat Barack Obama, defund Planned Parenthood, repeal this Obamacare monstrosity, cut taxes and downsize the government. That's good enough for me. And I believe there is a good chance--despite all of Romney's money and connections and show-biz glitter--that Newt will eventually overtake Romney and win his party's nomination for president. There are still forty-five state primaries left, and I think he can do it. In short, I think this is a classic case of Mother Angelica's axiom, "Don't let the perfect get in the way of the good." Ron Paul is the perfect, Newt Gingrich is the good. The bitter irony is that if we try to hold out for the perfect, taking support away from Gingrich and giving it to Paul, we may wind up with Mitt Romney as the next president of the United States.
Posted by Justin Soutar at 8:33 PM No comments: