Rollin' Along with the Newsboys 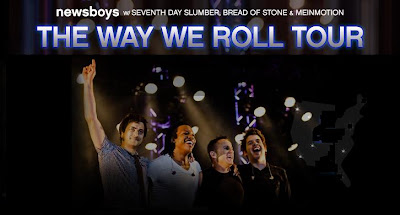 The newsboys have been one of my favorite Christian pop/rock bands ever since I was introduced to their music in 2004. My family and I are relatively latecomer fans compared to the legions of music lovers who have been enjoying this group since the 1990s. Perhaps there are also a few Australians who remember the 'boys' independent first release on cassette tape in 1987, He's Coming Back, before they left for the States to sign their first record deal. It was the 1992 release of Not Ashamed on the Star Song label that catapulted the newsboys to fame in the Christian music world. A string of Dove Awards followed, and subsequent albums sold like hotcakes, with many number one hits such as "Shine," "Spirit Thing," "Beautiful Sound" and "Breakfast." In 2002, the year of their CD release Thrive, the newsboys were inducted into the Rock and Roll Hall of Fame in Cleveland, Ohio. Next year their first worship album, Adoration, was the third to top the Christian music charts. The favorably reviewed GO album of 2006 was followed by three national concert tours, all of which were very popular. During those tours, the newsboys released a compilation entitled The Greatest Hits. Continuing the theme of motion, in 2008 the band recorded and released a spectacular live concert DVD in Houston, Texas called Houston We Are GO. While I have not yet purchased this album, it is definitely on my list.

What is the secret to the newsboys' phenomenal success in such a highly competitive field as modern Christian music? In answer, I would simply say that the newsboys have been doing their best to proclaim the Gospel message in their music, and to believe and live it in their offstage lives as well. Through the years, their music has sounded consistently positive, uplifting, inspiring and entertaining. Moreover, the newsboys differ from many other pop and rock groups who call themselves Christian but do not faithfully proclaim the Gospel in their music, or do not live as disciples of Jesus. And although the group does not share the fullness of the Christian Gospel truth found in the Catholic Church, it is almost like a Catholic band in its joyful spirit and the peaceful demeanor of its members.
For this ground-breaking, chart-topping, multiple-award-winning contemporary Christian music group, 2009 has been a remarkable milestone year. First, in March band founder and longtime lead vocalist Peter Furler publicly announced his decision to retire from center stage, while continuing his work as producer and songwriter for the band. He also nominated a good friend of the newsboys, Michael Tait, the accomplished leader of dc Talk, to take his place, and Mr. Tait gladly accepted. Then in May, the newsboys' final album recorded before Peter's resignation, In the Hands of God, was released nationwide. In the following weeks it was snapped up by millions, becoming the band's first number-one bestselling Christian album in the United States since "Adoration" had achieved that ranking in 2003. Finally, in October "the new newsboys" took their show on the road with "The Way We Roll" tour, featuring Michael Tait along with veteran band members Jody Davis, Duncan Phillips and Jeff Frankenstein.
When I first heard that Peter Furler had quit his lead role, I considered the newsboys to be disbanded as far as I was concerned, and resolved not to follow them any more or purchase any of their future recordings. However, my opinion and resolution have fortunately changed, and the success of "The Way We Roll" tour has rekindled my enthusiasm for the band. Michael Tait couldn't have been a better choice to carry on the mission of the newsboys. While I still miss Phil Joel and Peter, Duncan and Jeff are familiar faces. Additionally, the return of Jody Davis (the only Catholic member) to the band is a pleasant surprise, and certainly a plus that helps balance out the recent losses. I am now looking forward with genuine interest to the release of the newsboys' first album starring their new lead singer, Michael Tait.
Good luck, 'boys.
Posted by Justin Soutar at 4:30 PM