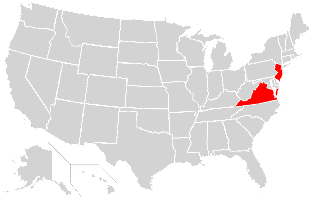 Okay, I have some stuff to catch up on here. Good news! One year after the smashing electoral victory that sent Illinois Senator Barack Obama to the White House with such power and glory, a few state elections held earlier this month (on November 3) seem to hint that the process of recovery has already begun for Republicans. In Virginia, Republican gubernatorial candidate Bob McDonnell defeated Democratic contender Creigh Deeds by a landslide, winning 59 percent of the vote to Deeds' 41 percent. McDonnell will replace the state's Democratic incumbent governor Tim Kaine. In 2008 a big deal was made of the fact that President Obama cruised to a win in Virginia, making it a "blue state" for the first time in thirty years. However, the magic of Obama seems to be losing its power. Twice this year, the president visited Virginia to publicly demonstrate his support for Deeds and urged Virginians to vote for him. Such efforts were ultimately fruitless. However, this Republican comeback was considered fairly predictable in a state that has been traditionally red for decades, and because of that it still counted as only a minor setback for President Obama.

Yes, the Obama administration might have dismissed this loss and moved on, had it not been for another top-level Republican victory in New Jersey. Here a Republican candidate for the governorship, Chris Christie, defeated Democratic incumbent governor Jon Corzine by a margin of 49 to 45 percent. This victory was considered more significant, however, because New Jersey is a highly urbanized East Coast state that in recent years has been just as blue as California. Moreover, just last year New Jersey voters selected President Obama by a landslide of 66 percent.

This one-two punch was certainly a test of President Obama's influence, as the media correctly admitted. And I think it is fair to say, that these two Republican pickups in an election off-year are evidence of a much broader dissatisfaction with the Obama administration that has already permeated the American public just in that administration's first year in office. Americans may have elected Barack Obama with a rush of gushy feelings because he was a handsome, positive orator who offered hope and change, as well as to show their disappointment with certain aspects of the Bush administration and Republicans. But when it comes down to concrete issues such as abortion, traditional marriage, health care, taxes, and the economy, during 2009 it has been President Obama versus the American people. On abortion and traditional marriage, important victories have been won in spite of the administration. On health care, Americans don't want an expensive "public option" that would create a vast new government bureaucracy and jack up their taxes to further heights. On taxes, the American people want a real tax cut; the administration has not given it to them. On the economy, unemployment rates continue to rise, small businesses are closing much faster than new ones are opening, and the average Joe is no better off than he was a year ago. No wonder our president's nationwide approval rating is now in the 40s.

I myself do not profess to be a Republican or a Democrat, but am independent of political parties. Thus I find the election results in these two states significant not so much because Republican candidates won, but because both of the Democratic candidates who lost were pro-abortion. In other words, the Democratic ship is sinking because most of its passengers insist on continuing to promote an evil practice that Americans no longer support. Nationally, the election results taken together are a backlash against Democrats in Congress and the White House for championing abortion and raising taxes.

Oh, and did you hear the rest of the good news from Election Day? Voters in Maine turned down a referendum that would have allowed "gay marriage" in their state. This makes Maine the 31st state in a row to reject homosexual "marriage" by popular vote.

More good news in the next column.
Posted by Justin Soutar at 12:56 PM