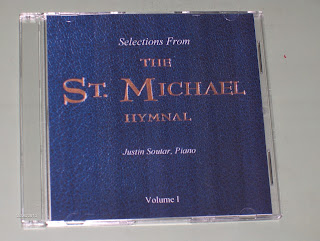 Thanks to all those who have purchased a copy of my instrumental piano album "Selections from The St. Michael Hymnal" since its release in February 2013. This little two-disc set represented my initial foray as a solo piano artist into the world of music recording, production and distribution. For me as a Catholic pianist, the highest purpose of music is to give glory to God in service to His Church, and that's what I tried to accomplish with this album.

The initial idea for this project was suggested by a zealous lay Catholic friend of mine who holds weekly prayer meetings at the houses of other friends in his area. Back in late 2011, he had discovered The St. Michael Hymnal and decided to have everybody sing a hymn from it at each gathering. He approached me and asked if I could record some of his favorite hymns from the Hymnal onto a CD so they could have some accompaniment to sing to. I agreed to do this on my restored 1966 Wurlitzer spinet piano using The St. Michael Hymnal Organ and Choir book and actually decided to record all fifty of the hymns on his list of favorites. 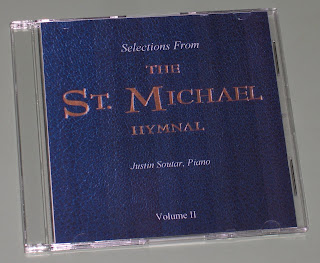 The recorded hymns wouldn't all fit onto a single 80 minute CD, so I had to spread them onto two discs. My friend also suggested that I could make copies of the CDs and market and sell them on the Internet. I decided to do this as well, which necessitated obtaining the required permissions from copyright holders of the four hymns on this album that are copyright protected. I also had to contact the staff of the Hymnal and get permission to use their cover on the CD inserts, which they gladly granted. Then I had to figure out how to burn, test, label, and encase hundreds of CDs and make the final product look attractive enough to sell. It was a bit of a learning curve for me and quite an investment in time and raw materials, but I think the final result was worth all the effort. Given that this was a small independent project, I was pleasantly surprised by the overwhelmingly positive feedback from buyers, and I am grateful to God for the success He has given me. 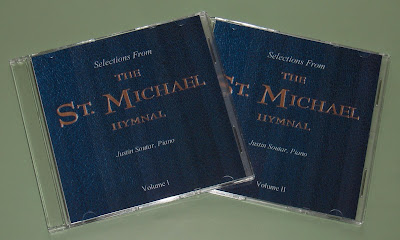 Now the time has come to clear out my remaining inventory of St. Michael CDs in order to make room for future music projects I have planned. So I am announcing a Summer Blowout Sale that begins today and will run until August 12. Volumes I and II are now available for just $10.00 each (original price was $14.99), and you can now get the two-volume set for only $18.00 (original price was $24.99), and the shipping is on me. Please email all order requests to justin_86 "at" ntelos "dot" net. If you know anyone who is a fan of The St. Michael Hymnal and would like this album, tell them about it or buy them a copy and send it to them. But don't wait--after August 12, 2015, this album will no longer be available for purchase, and quantities are limited. So hurry and get your copy today!
Posted by Justin Soutar at 12:02 PM