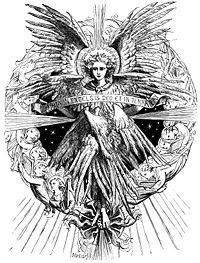 (NOTE: This article originally appeared in the November 2017 edition of The Shamrock, the quarterly newsletter of Saint Patrick Catholic Church in Lexington, Virginia.)

“’Glory to God in the highest, and on earth peace to people of good will’” (Lk. 2:14). This joyful proclamation of the Angels on the night of Christ’s birth more than two thousand years ago has continued to resound uninterruptedly through the ages in the Church’s liturgical tradition, in the pages of Sacred Scripture and in the hearts and voices of countless believers. Early in the Church’s history, this biblical text was developed into the great liturgical hymn of adoration, thanksgiving and petition known as the Gloria. Our current English Mass translation accurately reflects the centuries-old original Latin: “Gloria in excelsis Deo et in terra pax hominibus bonae voluntatis.” As Latin Rite Catholics, we sing or recite the Gloria not only during the Christmas season, but also on most Sundays and all solemnities and feasts of the liturgical year when the Church summons us to full-throated praise of the triune God.

The angelic Christmas carol hints at the twofold purpose of the sacred liturgy, which is to glorify God and to sanctify ourselves. From ancient times to the present, liturgical music—always sung and often accompanied by musical instruments—has played an essential role in achieving this dual purpose. Sacred music has the power to elevate the mind and heart to God and to express thoughts and prayers in ways that the spoken word simply cannot. As then-Cardinal Joseph Ratzinger put it in The Spirit of the Liturgy: “When man comes into contact with God, mere speech is not enough. Areas of his existence are awakened that spontaneously turn into song.” This comes into clear focus when we look at the Old Testament Book of Psalms, the great musical prayer book of ancient Israel which has shaped much of the Church’s liturgical and musical tradition. Intensely personal and written for specific situations, while also universal and timeless, the Psalms are classic expressions of adoration, thanksgiving, contrition, and petition representing the full range of human experiences in relation to God.

The Second Vatican Council underscored the essential link between church music and the words and actions of the liturgy, referring to the former as “a sacred chant wedded to words” that “constitutes a necessary and integral part of solemn liturgy.” In other words, music is not something extraneous added on to the liturgy like icing onto a cake; rather, it’s a key ingredient of the liturgy itself, and “the more intimately church music is linked with the liturgical action the holier it will be.” Following Vatican II, the Church identified three specific degrees of music within the liturgy. The first and highest degree is sung dialogue, with the priest’s greeting or prayer followed by the people’s reply (e.g. “The Lord be with you,” “And with your spirit”). Gregorian chant, which “should have the chief place in liturgical functions” according to the Council, is our mainstay for liturgical music of the first degree. The second degree includes the remaining prayers of the Mass, and the third and lowest degree is hymns and songs. According to the Instruction on Music in the Liturgy issued by the Sacred Congregation of Rites in 1967, the second and third degrees may not be used unless the first is in place.

A distinctive element of Catholic worship is the belief, and the fact, that during Mass we unite our voices to those of all the Angels of heaven, participating for a few brief moments in their endless hymn of praise to the Lord of all creation. Our solemn liturgical celebrations of the Nativity of the Lord at Christmas and the Resurrection of the Lord at Easter are moments when the Gloria rings out anew with intense joy and gladness, as accompanied by the organ, bells and other musical instruments, we join with the hosts of heaven in singing the celestial music that penetrated our sad and weary world on that holy night more than two millennia ago. May this year’s celebration of Christ’s birth renew our gratitude to God our Father for the priceless gift of His Only-Begotten Son and for all of the blessings, graces, and good things He has given us through Him and in the Holy Spirit.