Habemus Papam! We Have a Pope! 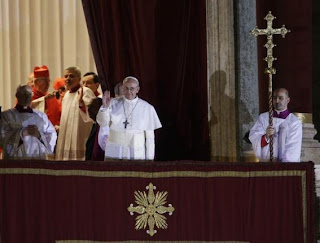 Today, on just the second day of the conclave and on the fifth ballot, Cardinal Jorge Mario Bergoglio, 76, the Archbishop of Buenos Aires, Argentina, has been elected the 266th Supreme Pontiff of the Roman Catholic Church, and the 265th Successor of Saint Peter, and has taken the name of Pope Francis. He is the first pope from Latin America, the first Jesuit, and the first non-European pope in many centuries.

Wow! Lots of surprises here. For one thing, I did not expect the cardinals to elect a new pope so quickly, given that the cardinals seemed to lack clear direction in the wake of Pope Benedict's stunning resignation, and the fact that no single cardinal stood out as a clear front-runner going into this conclave. But apparently the cardinals took their responsibility seriously and were able to reach a consensus quickly.

For another thing, I was not expecting this particular man to be elected. I did include him on my list of thirty-two papabili (see recent post below, "Who Will Be the Next Pope?") because according to my research he did meet the qualifications for a serious papal candidate; however, I put him a ways down the list (at #20)because I felt he was a bit of a long shot, partly because of his age. I also felt a Latin American pope was less likely than an Italian or other European. But age, nationality, and even precedent are not the primary considerations for the cardinal electors in choosing a new pope. Their solemn responsibility is to follow their consciences and cast their ballot for the man whom they feel is best qualified to lead the Church at this particular moment. And that they have done, thanks be to God.

Also, I was not expecting the new pope to take a name that no previous pope has used. I thought he would call himself Pope John Paul III or Benedict XVII or Paul VII or John XXIV or Pius XIII or something like that. But no, he chose Francis. What a beautiful and appropriate name--perhaps in honor of Saint Francis of Assisi, the poor and humble man, and Saint Francis Xavier, the great Jesuit missionary--or perhaps in honor of Saint Francis de Sales, the sixteenth-century "gentleman saint."

I had never seen this man prior to his appearance on the loggia of Saint Peter's Basilica, so I wasn't sure what to expect. Initially he seemed a little distant and rigid, perhaps a bit hesitant, standing almost motionless, solemnly facing the massive crowds of cheering people in Saint Peter's Square, acknowledging their applause with an occasional slight wave of one hand. His dignified stance reminded me of Pope Pius XII and earlier pre-Vatican II pontiffs. Then as he began speaking into the microphone, smiling as he warmly greeted the people, my fears melted away and I was instantly won over to the new pope. His words of greeting lasted at least a minute, longer than those of the two previous popes. I was impressed by how he bowed down in front of the whole world and asked us, the faithful, to pray that God would bless him before he gave us his first blessing as our new pope. Once he had done that, he added a few words of farewell, saying he looked forward to seeing the people on Sunday, and wishing them good night. This is a man of profound humility and deep faith, a man of restrained and even temperament who also knows how to communicate with an audience through words and meaningful gestures. I'm sure he will do a fine job of succeeding the two great pontiffs before him.

We are truly blessed to have Pope Francis as our new Holy Father. May God bless him and help him, through the intercession of the Virgin Mary and all the Angels and Saints, to faithfully carry out the task entrusted to him for years to come.