The Saint Who Was Stolen Twice 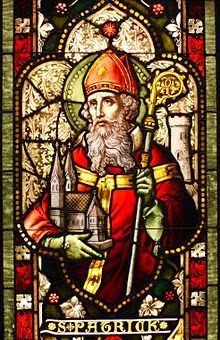 Today is the feast of Saint Patrick (c. 381--456), the legendary Apostle of Ireland and one of the world's best-known Catholic saints. He is right up there with Saint Nicolas in terms of the traditional legends and folklore surrounding his life, the permanence of his impact on Christian culture, and the ubiquity of his popularity among the general public. In fact, as with Saint Nicolas, the legends and culture that have grown up around Saint Patrick sometimes tend to obscure the actual historical facts of his life.

Patrick was not native to Ireland, nor was he even of Irish ancestry. He was born to Scottish parents in pagan Britain, which was part of the declining Roman Empire. At the age of sixteen, he was captured by Irish pirates and sold into slavery in predominantly pagan Ireland, where he worked as a shepherd in captivity for six years. During this period, he underwent a profound change of life and converted to Christianity. He escaped back to Britain, where he heard God calling him to bring the true faith to the Irish people. He was ordained a priest and consecrated a bishop, and then returned to Ireland as a missionary. So we can really say that the Irish stole Patrick twice--first they stole his freedom, and then they stole his heart.

For the next thirty years, Patrick labored unceasingly, often amid great difficulties, to establish the Catholic Church in his adopted country by preaching and teaching, baptizing, ordaining priests and bishops, and founding churches. He was a man of deep faith, profound humility, constant prayer, and great penance to whom God gave the gift of working miracles. According to Fr. Albert J. Hebert, whose research is confined to reliable sources, Saint Patrick raised thirty-three people from the dead during his lifetime. By the time of his death, more than half of Ireland was Catholic. The scope of his monumental achievement is still remarkable today. Saint Patrick built some 700 churches, ordained 5,000 priests, and consecrated 350 bishops. He laid the foundation for Irish Catholicism so well that Ireland has remained a Catholic country for some 1,600 years--more than a millennium and a half. Although today the Emerald Isle is under attack by the forces of radical secularism, pockets of devout Irish Catholics ensure that the true faith will continue to live on in this great country for the foreseeable future.

Saint Patrick was truly one of the greatest missionaries in the history of the Church. It is plainly obvious that Divine Providence raised him up at that particular time and place to convert Ireland to the Catholic faith. A great saint like this should make us all proud to be Catholic. Yet he is just one of the best known of hundreds and hundreds of saints throughout the 2,000-year history of the Church. It is worth taking time to read at least part of the saint's own autobiography, the Confession of Saint Patrick, which has survived to our own day and which offers an unforgettable glimpse into the soul of this great man. I have just been blessed to stumble upon this forgotten classic of ancient Christian literature, which deserves to be rediscovered.

Saint Patrick, pray for us!

A happy Saint Patrick's Day to everyone!
Posted by Justin Soutar at 1:27 PM