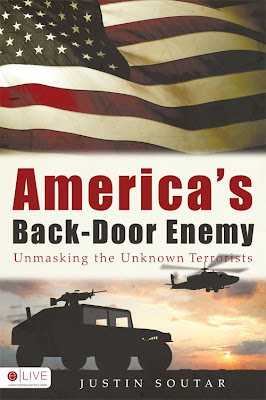 Stay tuned for more information about the book in upcoming posts. In addition, I'll be happy to answer any questions you may have about the book.
Posted by Justin Soutar at 11:31 AM No comments:

Introduction: This Is My First Post, On My First Blog!

Well, it took me four years to start my own blog, but here it is, finally. I have long dreamed of starting my own "real" website, but was always deterred by the monthly costs and time involved. I've since come to realize that a blog site is the next best thing--especially for a writer.

I am what may be described as a very traditionally-minded young person. When I first heard of "blogs" about seven years ago, I thought they were exotic, outlandish or a waste of time. But since then, the popularity of blogs and blogging on the Internet has exploded exponentially (just like the Internet itself and every other invention of the Digital Age). I resisted getting my own blog because I felt strongly that the "blogosphere," as it has come to be called, was just another symptom of modern cultural decay. The few blogs I had visited confirmed my generalized opinion: they were full of banal, meaningless chatter ridden with twenty-first-century slang that actually passed for "writing" about immoral subjects or topics that did not interest me in the slightest. Well, generalized negative opinions are often wrong, and this one was no exception. The realm of blogs is not uniformly dark. At best, the type of blog I just described can serve purely educational or recreational purposes; at worst, it is simply (like the Internet itself) another agent of the culture of death.

As the blogosphere expanded, I gradually got to know, and occasionally even visit, some really good blogs (which I will be recommending here). It dawned on me that the instrument of the blog can be used for good or for evil. So why not use it for good? After all, Pope John Paul II and Pope Benedict XVI have given us a challenge: They have called on us to use all the modern means of social communication available to evangelize the world, to spread the Good News of Jesus Christ, to be the salt of the earth and the light of the world, and to foster a renewal of the Christian culture that gave birth to our Western civilization. I'm ready to answer that challenge right here on my first blog.

The main topics I currently plan to write about here are my first book, abortion & the pro-life movement, American politics and elections, the economic crisis, U.S. and world news stories that grab my attention, the Catholic Church, and anything else that interests me.

Enjoy the site, and feel free to post your comments below.
Posted by Justin Soutar at 12:36 PM 3 comments: