"From above, from where Christ reigns, the Mother of the Church accompanies the journey of God's people, supporting even the most tiring steps, comforting those who are undergoing trials and keeping open the horizon of hope."

Posted by Justin Soutar at 10:59 AM No comments:

"Our day is rather harsh and unforgiving toward human frailty, an attitude that, sadly, characterizes the manner in which many Catholics relate to one another. Yet God is rich in mercy (Ephesians 2:4) and no one can survive without divine forgiveness (Psalm 130:3). From the frequent cry for mercy in the Divine Liturgy we learn the foundation of true human solidarity: since all are in need of God's tender compassion, we must be merciful toward one another."

Posted by Justin Soutar at 11:22 AM No comments:

A Brief But Grace-filled Retreat

Last week I was blessed with the opportunity to make a pilgrimage to the Shrine of the Most Blessed Sacrament in Hanceville, Alabama and the world headquarters of EWTN in Irondale (Birmingham), Alabama, established by Mother Angelica in 1999 and 1981, respectively, for the first time in thirteen years. I had visited both places several times with my parents and sister in the mid-2000s when I was in my late teens and twenty years of age, a rather difficult period in my life when I was struggling with physical and mental health issues, trying to discern my vocation in life, somewhat lacking in maturity and also, unfortunately, growing spiritually lukewarm. Now in much better health, looking forward to marriage, more mature and serious about my faith, I saw both places with new eyes and enjoyed my solo visit immensely. 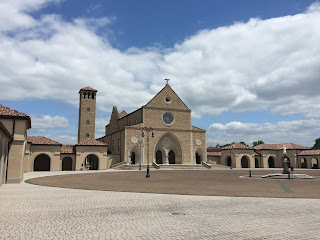 I was concerned that visiting Alabama in July might not be a good idea due to hot humid weather and the possibility of tornadoes, but as it turned out, the weather was both peaceful and not too hot. I drove through several light and heavy rain showers in southwest Virginia and eastern Tennessee on my way down there on Monday, July 22, arriving at my motel in Hanceville to partly cloudy conditions. When I went to visit the Shrine Tuesday morning the 23rd, the sky was overcast and it looked like rain, but no rain fell, and in the afternoon the clouds broke up and the high temperature was only 85 degrees. The Main Church of the Shrine with its marble, stained glass and gold leaf Gothic interior was just as magnificent as I remembered, and I spent several hours that morning and afternoon praying to Jesus in the Blessed Sacrament, Who is perpetually enthroned in the massive golden monstrance, and drinking in the majestic splendor of this great Temple. The periodic and rhythmic chanting of the invisible Poor Clares of Perpetual Adoration contributed to the prayerful atmosphere. Out of respect for the Blessed Sacrament and praying pilgrims, no photography is allowed inside the church, so I made sure to buy some postcards of the interior in the nearby Gift Shop of El Nino. I also briefly descended into the crypt church and saw Mother Angelica's grave in the burial vault. 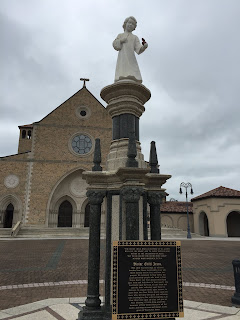 I had previously decided to check out the Saint John Paul II Eucharistic Center, a new addition to the Shrine complex that did not exist when I last visited. So I joined the 10:30 AM tour and was stunned by the quality and scope of the numerous video and audio exhibits and tutorials on the biblical, theological, doctrinal and historical foundation of the Mass and the Holy Eucharist as well as on Eucharistic miracles and martyrs. All in all, I found this Center to be an incomparable treasure trove of information on the Holy Eucharist. 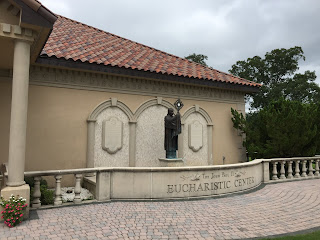 In the afternoon, I explored the beautifully landscaped grounds surrounding the Shrine, including the Lourdes Grotto, a replica of the famous French pilgrimage site that features an actual piece of rock from the real shrine. I also walked a short outdoor path featuring Stations of the Holy Eucharist, a series of reflections on twelve biblical and historical events that shed light on this great mystery of our Faith such as Melchizedek's offering of bread and wine, the Passover lamb, the manna in the desert, the wedding at Cana, the multiplication of loaves, the Last Supper, and the road to Emmaus. 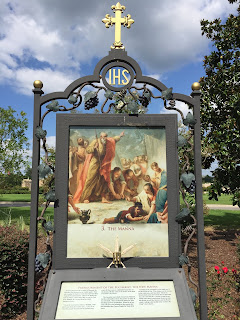 Early on a sunny Wednesday morning, July 24, I took part in a beautiful, reverent, unhurried, and traditional ad orientem conventual Mass in the Shrine main church celebrated by Father Barry Braum, a young priest who preached in a simple, direct and attractive style on the day's Gospel reading of the parable of the sower, applying Christ's teaching to our own lives. The seventy or so people present in the nave participated devoutly and attentively in the Mass. The hymns and ritual music were chanted a cappella by the nuns, and the organ meditation music during Holy Communion was both majestic and comforting. Like the other worshipers, I received Communion at the altar rail. Surrounded by so much beauty in architecture and music and the presence of God Himself, I felt like I was in Heaven. That's what the Mass is, after all: a participation in the liturgy of Heaven. The magnificence of the Shrine, and the calm solemnity of the sacred liturgy that takes place within it, powerfully remind the worshiper of that fact. At the end of Mass, the huge decorative wall blocking the monstrance from view slid back down into its vault behind the tabernacle, revealing the Blessed Sacrament once more. The sun had now risen far enough that the eastern Holy Spirit rose window appeared to be completely on fire. I finished my thanksgiving and then reluctantly took my leave of this beautiful church. 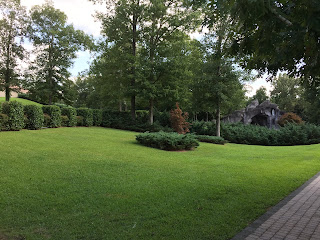 Taking a short drive south on I-65, I arrived at EWTN headquarters around noon and found a parking space around back near the satellite dishes. I strolled around the shady grounds and took some pictures of the chapel, the grotto, the Stations of the Cross, and the very tall pine trees; then I returned to my car which was parked in full sun, opened the windows, put the sunshade across the windshield, and had some lunch (it was 89 degrees). After that, I briefly visited the chapel of the Franciscan Missionaries of the Eternal Word where, as in the Shrine at Hanceville, the Blessed Sacrament is perpetually on display. Built in the early 1960s, this architecturally modern chapel with its distinctive curving roof design, large glass area and vivid red carpet is much smaller than it looks on TV. Exiting the chapel, I said hello to Father Mark, who courteously showed me the way to the gift shop. I joined about twenty-five other people for a guided tour of the network at 2:45 PM and saw the various offices and control rooms up close, including Mother Angelica's former office adjoining the studio where she experienced a miraculous healing of her back and leg injuries through the prayers of an Italian mystic in 1998. 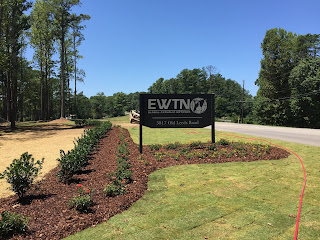 That evening, I was in the studio audience with most of the people from the tour for the flagship TV show EWTN Live with Father Mitch Pacwa. Twenty minutes before showtime, he came striding into the studio in his trademark cowboy hat and boots and made sure we turned off our cell phones. That evening's guests were two doctors, the president and president emeritus of the Catholic Medical Association, and they had an important discussion about the depersonalization of modern medicine, radical secularists' attack on human life, and how these factors are affecting doctors who want to adhere to natural law and traditional moral values in their practice. Following the show, the two doctors chatted informally with us in the audience, and then Fr. Pacwa entertained us with stories and photos of his latest big-game hunting adventures. 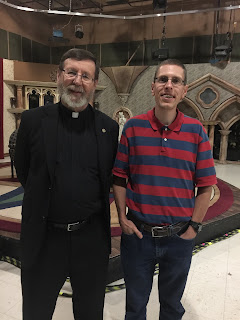 I had planned to conclude my visit to EWTN by attending 7 AM Mass in the chapel on Thursday, July 25, the Feast of Saint James the Apostle. I woke early, showered and headed for the chapel shortly after 6:30 AM, but the roads from my motel to the network were confusing and I got lost. I finally arrived right at 7 as the Entrance Chant was being sung and the chapel was already filled to capacity, so I had to sit in the nearby overflow chapel and participate in the Mass through the live TV feed. But I was thrilled just to be there; the organ and choir music were heavenly, and Father Pacwa's excellent homily focused on the Christian meaning and value of suffering. After Mass was over, I spent a few minutes praying in the main chapel and then returned to the motel to prepare for the long drive back to western Virginia. I was pretty tired when I got home that Thursday evening, but I was filled with the joy and peace that come from being loved by God and striving to love Him and others. 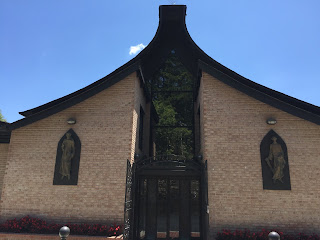 My four-day trip to Alabama was the brief but grace-filled retreat I sorely needed. I returned home mentally refreshed and renewed and spiritually confirmed and strengthened in my lifelong Catholic faith. My current single life as a church music minister and small farmer with a chronically ill mother to care for is a busy one filled with the pressure of many commitments, and it's easy to become too focused on getting things done while losing sight of the bigger picture. Through this unforgettable retreat experience, I realized that I had become too hard on myself in certain ways; I needed to be reminded how much God loved me, and that I need to stay close to Him and allow Him to act in and through me. I'm very thankful to the Lord for granting me this experience and to His Holy Mother and all the Angels and Saints for obtaining it for me, and I can't wait to visit the Shrine and EWTN again!
Posted by Justin Soutar at 1:01 AM No comments:

“We can obtain no reward without merit, and no merit without patience.”

Posted by Justin Soutar at 5:34 PM No comments: