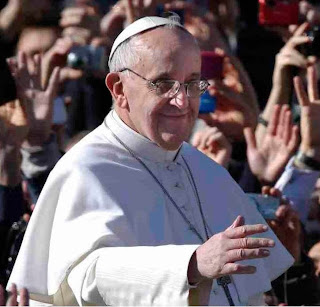 Posted by Justin Soutar at 2:37 PM No comments:

Faith is not simply a matter of man’s intellectual assent to truths about God; it is an act whereby I freely entrust myself to a God who is a Father and who loves me; it means clinging to a “Thou” who gives me hope and confidence....Faith means believing in God’s unfailing love, which endures even in the face of man’s iniquity, of evil and of death, and which is able to transform every form of slavery by granting the possibility of salvation. To have faith, then, is to encounter this “Thou” - God - who sustains me and offers me the promise of an imperishable love that not only aspires to eternity but also gives it. It means entrusting myself to God with the attitude of a child who knows very well that all of his difficulties and problems are safe in the “thou” of the mother.

Posted by Justin Soutar at 11:35 AM No comments:

"We live in a society in which it seems that every space, every moment must be 'filled' with initiatives, activity, sound; often there is not even time to listen and dialogue... Let us not be afraid to be silent outside and inside ourselves, so that we are able not only to perceive God's voice, but also the voice of the person next to us, the voices of others." --Benedict XVI
Posted by Justin Soutar at 11:30 AM No comments:

“The faith is not something decorative, ornamental; living the faith is not decorating life with a little religion, as if life were a pie and faith like the whipped cream that you use to decorate it. No, faith is not this. Faith entails choosing God as the basic criterion for life, and God is not empty, God is not neutral, God is always positive, God is love, and love is positive!"
--Pope Francis
Posted by Justin Soutar at 11:57 AM No comments:

"My Christmas with Mother Teresa" Is Now Complete!

Great news! More than five years after beginning the work, I have now completed a final draft of my second book, entitled My Christmas with Mother Teresa, and have begun the process of locating a publisher. This book tells the amazing never-before-told true story of how the Missionaries of Charity and Catholic Relief Services (CRS) worked together to bring emergency humanitarian aid to some ten million Bengali refugees who flooded eastern India in 1971. The written account is based on my personal interviews with John Mathews, the now retired CRS Program Director who spent nine years (1969 - 77) in India working side by side with Mother Teresa helping the poorest of the poor. The book tells how he and Mother Teresa organized and directed this massive charitable undertaking for the East Pakistani refugees--and how he was unexpectedly given the opportunity of a lifetime to spend one very special Christmas with "the Saint of Calcutta". Details of the book's publication and availability will be coming soon here on my blog, so please stay tuned!
Posted by Justin Soutar at 12:23 PM No comments:

Posted by Justin Soutar at 12:10 PM No comments:

"The building of a global culture of solidarity is perhaps the greatest moral task confronting humanity today and it will challenge the materialism that erodes the foundations of Western society." --Blessed John Paul II

Posted by Justin Soutar at 9:38 PM No comments:

Here is the text of my letter to Senator Rand Paul in response to the petition he is now circulating in favor of term limits for U.S. senators and representatives:

First of all, I thank you sincerely for the excellent service you have rendered thus far to the state of Kentucky and to our nation as a U. S. Senator. Please keep up the great work you are doing to restore America's former greatness based on religion, morality, and Constitutional principles.

As a devout Catholic American, registered voter, author, and Tea Party activist from the neighboring state of Virginia, I fully support and applaud your noble efforts to protect the right to life of the innocent unborn, to preserve marriage as the union of a man and a woman, to defend our religious liberties and moral conscience rights from the unjust encroachments of a tyrannical regime (the Obama administration), to hold that administration accountable for its egregious abuses of power, to reform our tax system, to reduce the size of government, and to help struggling Americans during these difficult economic times. I am with you one hundred percent on most of the issues our country faces, and I'm pleased to sign most of the petitions you pass along.

However, I cannot in good conscience sign your most recent petition, "Term Limits for Members of Congress," because I do not support such term limits for our elected representatives in the federal government. Our nation's Founding Fathers prudently counseled against arbitrarily limiting the number of terms that any federal public official, including the President, may serve. They believed that their continuance in office should depend on the support and vote of their constituents, and not be artificially constrained by legal term limits. I agree completely with the Founders in this regard, and believe that their arguments against term limits are still valid today.

Mr. Senator, I respectfully urge you to consider the Founders' reasoning on this issue carefully before rushing to enact arbitrary term limits for members of Congress. Such term limits would function as a double-edged sword. You and other supporters of term limits are well-intentioned and striving to protect our nation from tyrannical leaders, but if such restraints were put in place, they would also prevent the voters from re-electing outstanding Senators and Representatives who have served them well and would continue to do so if given the opportunity. (Your father's distinguished career in the House, for example, would have been cut short many years ago if his fine service had been restricted to just three terms. I could say the same for dozens of other current and past Representatives as well as for some Senators who have been re-elected multiple times, serving their state and country well over many years.)

The Founders' reasoning is equally applicable to the office of the President of the United States. I have no problem with the fact that American voters gave FDR four terms. Our country needed his leadership at the time, and although I would disagree with some of his policy decisions, he was nonetheless a good President. However, I do have a problem with the fact that the states decided to arbitrarily prevent any future president from serving more than two terms in office. This artificially restricts the service of good Presidents to no more than eight years and prevents the voters from re-electing a good President whose continuance in office would be beneficial to our country. At the same time, the Twenty-Second Amendment to our Constitution will not stop a determined tyrant from retaining the office of President for as long as he wishes. If such a tyrant is determined to take over our nation, he will not allow Constitutional term limits or any other laws to stand in his way, because a tyrant has no regard for the rule of law in the first place. For these reasons, I strongly favor the repeal of the Twenty-Second Amendment.

I also believe that U.S. Supreme Court justices should be subject to review and re-confirmation by Congress and the President every ten years, and I would support a new Constitutional Amendment to this effect.

Thank you for considering my views on this issue of term limits. Please be assured of my continued prayers and support as you carry out your mission of service to your state and to this great country.

"I would like to appeal to those in possession of greater resources, to public authorities and to all people of good will who are working for social justice: never tire of working for a more just world, marked by greater solidarity! No one can remain insensitive to the inequalities that persist in the world!" --Pope Francis

Posted by Justin Soutar at 4:15 PM No comments: