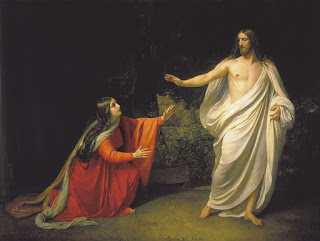 "Galilee was an outpost: the people living in that diverse and disparate region were those farthest from the ritual purity of Jerusalem.  Yet that is where Jesus began his mission.  There he brought his message to those struggling to live from day to day, the excluded, the vulnerable and the poor.  There he brought the face and presence of God, who tirelessly seeks out those who are discouraged or lost, who goes to the very peripheries of existence, since in his eyes no one is least, no one is excluded.  The Risen Lord is asking his disciples to go there even now: he asks us to go to Galilee, to the real “Galilee” of daily life, the streets we travel every day, the corners of our cities.  There the Lord goes ahead of us and makes himself present in the lives of those around us, those who share in our day, our home, our work, our difficulties and hopes.  In Galilee we learn that we can find the Risen One in the faces of our brothers and sisters, in the enthusiasm of those who dream and the resignation of those who are discouraged, in the smiles of those who rejoice and the tears of those who suffer, and above all in the poor and those on the fringes.  We will be amazed how the greatness of God is revealed in littleness, how his beauty shines forth in the poor and simple." 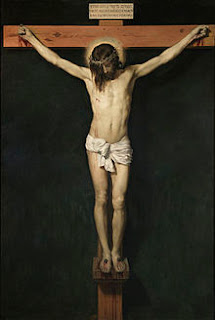 "It does not occur to them [the Sanhedrin] that by mocking and striking Jesus, they are causing the destiny of the Suffering Servant to be literally fulfilled in him. Abasement and exaltation are mysteriously intertwined. As the one enduring blows, he is the Son of Man, coming in the cloud of concealment from God and establishing the kingdom of the Son of Man, the kingdom of the humanity that proceeds from God. 'Hereafter you will see...', Jesus had said in Matthew's account (26:64), in a striking paradox. Hereafter--something new is beginning. All through history, people look upon the disfigured face of Jesus, and there they recognize the glory of God."

--Benedict XVI, Jesus of Nazareth: Holy Week: From the Entrance into Jerusalem to the Resurrection (Ignatius Press, 2011), p. 182

Posted by Justin Soutar at 12:17 PM No comments: