Reflection for the Solemnity of Saints Peter and Paul 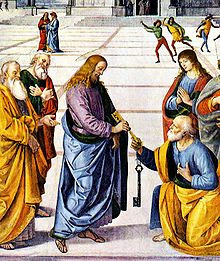 "Brothers and sisters, that which has occurred in a unique way to Saint Peter, also takes place in every Christian that develops a sincere faith in Jesus, the Christ, the Son of the living God. Today’s Gospel challenges each and every one of us. How is your faith? Each one must answer in their heart. How is your faith? What does the Lord find in our hearts? A steadfast heart like a rock or a sand-like heart, that is, doubtful, wary, incredulous? It would do us well today to think about this.


"If the Lord finds in our hearts a faith, I do not say perfect, but sincere, genuine, then He also sees in us the living stones with which he can build his community. Of this community, the fundamental rock is Christ, the only cornerstone. On his part, Peter is a rock, as a visible foundation of the unity of the Church; but each baptized person is called to offer to Jesus their own faith, poor but sincere, so that He can continue to build his Church, today, in every part of the world."

Posted by Justin Soutar at 10:23 AM No comments:

"Christians are called to be witnesses to prayer because our world is often closed to divine horizons and to the hope that leads to an encounter with God. Through a deep friendship with Jesus -- and by living a filial relationship with the Father in Him and with Him -- by our faithful and constant prayer we can open the windows to God's heaven."

Posted by Justin Soutar at 12:15 PM No comments:

A Buried Treasure: The "Ave Maria" of Bruno Vlahek 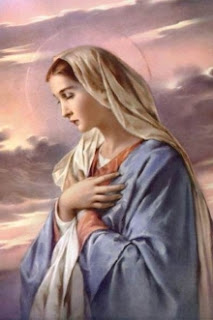 Back in 2013, I was visiting the popular British sheet music website Score Exchange (where I happen to sell some of my own music), searching for a good piano arrangement of the familiar and timeless Schubert Ave Maria. As I combed through the search results, I stumbled upon a completely different, and much more recently written, Ave Maria for soprano solo, SATB choir and piano that I had never seen or heard before. Using the site's Scorch playback feature to listen to the score on my computer (a mechanical device that gives a rough idea of how it should really sound), I found the unfamiliar music so hauntingly beautiful, richly complex and deeply moving that it became permanently engraved within my consciousness, impossible to forget. In fact, the emotional impact of this contemporary classical work dated 2005 was on par with the well-known classic Ave Maria compositions of Schubert, Bach/Gounod and Mozart. The site's description revealed that this piece was actually the composer's own piano reduction and SATB arrangement of his original version of the Ave Maria published in 2003, which was written for soprano, SAA chorus and orchestra.

The writer of this particular Ave Maria, a certain Bruno Vlahek, was also unfamiliar to me. Checking out his biography on Score Exchange, I learned that he is a remarkably gifted, world-renowned, award-winning Croatian composer and virtuoso pianist my own age, which meant--incredibly--that he had turned out both versions of this Ave Maria in his late teens. Since the piano/choral score was offered free of charge on the website at that time, I printed out a copy for myself, and during my leisure time on Sunday afternoons, I would occasionally amuse myself by attempting to play some of the piano part, which was quite complex and difficult with its simultaneous natural and syncopated rhythms and a half-dozen triplets thrown into a steady drumbeat of sixteenth and thirty-second notes. I longed to master the entire piece, but given my work schedule and commitments at the time, this was a pipe dream.

Then in late 2016, the good Lord gave me my dream job as a full-time music director at Saint Patrick Catholic Church in Lexington, Virginia. Realizing that 2017 would be the one hundredth anniversary of Our Lady's apparitions at Fatima, I decided that we should do something special musically to mark this important centennial, and I felt that the glorious but obscure Vlahek Ave Maria would be perfect for the occasion--something definitely off the beaten path that was beautiful and memorable. Here was a chance to publicly honor the Blessed Virgin Mary while sharing with the congregation a magnificent piece of music they had never heard before and would probably never hear otherwise. When I shared an excellent YouTube video performance of this score with the pastor, Father Joe, his reaction was the same as mine had been a few years earlier: "It's different, but I like it." He gave it his blessing right away.

So early in 2017, I rose to meet the formidable double challenge of mastering the piano part and teaching our little sixteen-member volunteer choir and soloist to sing the beloved Latin prayer to new melodies and unfamiliar rhythms. Initially the choristers were somewhat cool toward the piece and intimidated by the difficulty of the material, but after two months of patient rehearsal beginning in May, their attitude had changed from trepidation to enthusiasm; they had discovered that this challenging new Ave Maria was actually fun to sing! After three more months of prayer and diligent practice, as well as valuable advice and assistance from one choir member who is a band director, we were ready to present this stunning hymn to the Blessed Mother just in time for the conclusion of the Fatima centennial.

We finally presented the Ave Maria by Bruno Vlahek on October 29, 2017, during the 10:30 AM Sunday Mass with approximately 180 parishioners and visitors in attendance, my band director friend conducting the choir, and my small digital audio recorder going. While not perfect in every detail, our rendition was well received, eliciting spontaneous applause. As far I know, this was the first time it had ever been publicly performed in the United States. Father Joe responded with an immediate public request for an encore presentation on December 8, 2017, the Solemnity of the Immaculate Conception of the Blessed Virgin Mary. Somehow, with our conductor and one other choir member absent, we managed to execute it nearly perfectly at the 5:30 PM Mass that Friday evening. (Regrettably, I failed to snag an audio recording of this spectacular achievement.) Our third presentation, which fell somewhere in quality between the first and second attempts, took place during the 5:30 PM Mass on August 14, 2019, the Vigil of the Solemnity of the Assumption of the Blessed Virgin Mary.

I'm deeply grateful to the Lord and to his holy Mother for granting and obtaining for me and our little choir the talents and graces necessary to learn and share with our parishioners and visitors this awesome but largely buried contemporary Marian hymn masterpiece. It is no small accomplishment to have such a challenging world-class piano and choral work firmly in our liturgical music repertoire. I'm eagerly looking forward to performing it again as soon and as often as we have the opportunity to do so. My sincere hope is that our past and future efforts to share the Vlahek Ave Maria with others will contribute to making this jewel of twenty-first century Catholic classical music more widely performed, known and appreciated, so that it may eventually earn the honored and secure place it certainly deserves in both the Church and the world’s great musical treasuries.

"At this moment, in the great effort of beginning anew, how damaging is pessimism, the tendency to see everything in the worst light, and to keep saying that nothing will return as before! When someone thinks this way, the one thing that certainly does not return is hope. In these three – the narcissist idol of the mirror, the mirror-god; the complaint-god: “I feel human only when I complain”; and the negativity-god: “everything is dark, the future is bleak” – we experience a famine of hope and we need to appreciate the gift of life, the gift that each of us is. We need the Holy Spirit, the gift of God who heals us of narcissism, victimhood, and pessimism. He heals us from the mirror, complaints, and darkness.

Posted by Justin Soutar at 10:34 AM No comments: