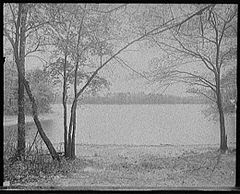 After four posts about my book and three about health care reform, it's a pleasure to introduce a new subject to my blog, that of literature. Last night, I was browsing through an old collection of American literature when I came upon some selections from Henry David Thoreau. This unusual writer offers a good example of what happens when a person overreacts to one extreme by swinging to the other. Thoreau was painfully aware of the evils of his day in social institutions, politics, and American society in general, but his response was to withdraw from society altogether and become a hermit on the shore of Walden Pond. This reaction was based on Thoreau's own pessimistic philosophy of life and his excessive distrust of human nature. Human nature is indeed weak, but Thoreau went so far as to assert that no human organization or group was of any value or could contribute any real benefit to humanity.

Such a cynical view is incompatible with Christianity. The Christian believes that Jesus, by the power of his Cross and Resurrection, has adopted us as his sons and daughters and shared with us the power of His Grace, so that we can build a society of true love and faithful service to one another. While the Christian fully realizes that human nature is still weakened due to the effects of original sin, and that these effects have led and will always lead to disorders in society, he hears the voice of God constantly calling him to participate in society precisely to remedy the evils that are present there. We each have a responsibility to work for the common good and for the reform and strengthening of social and civic institutions so they can better fulfill their missions.

Now, I'd like to point out that Thoreau's reaction of abandoning society to its wickedness is fundamentally different from when a person chooses to enter a cloistered convent or a monastery. The Christian who follows God's call to religious life is not turning his back on the cruel world and sardonically wishing it good luck. On the contrary, he is convinced that he and his fellow members of the religious community can do the world even more good by a life of prayer and sacrifice than if they were out in the world. Then a mysterious thing happens. The closer they come to God, the closer monks and nuns are spiritually to all their brothers and sisters outside. And God works through their prayers to bring spiritual blessings to people all over the world.
(To be continued)
Posted by Justin Soutar at 5:29 PM