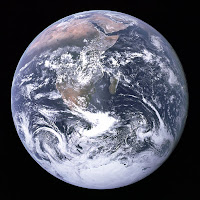 When the sun is shining, temperatures are pleasant and everything green is starting to sprout and grow, it makes you want to get outside and do some gardening. Spring has come early this year, but even if the weather is a little premature, it still has the same effect on us. As a result of unusually mild conditions in this area last month, (followed by summerlike conditions in early April,) I started working in my garden unusually early, in March. It seems strange to be outside sweating under a cooking sun when the threat of frost and cold nights is still very real, and it's too early to plant summer vegetables. Climate change is doing some interesting things to our weather.

One of the predictions of climate change scientists is that global warming will not simply produce overall warmer weather for the planet, but more extreme weather. This prediction has been borne out in the last few years all over this country and the world: increased rainfall in some areas, decreased rainfall in others; colder and drier winters in some places, snowier winters in others; bigger hurricanes, hotter summers, etc. Some of these changes have not caused any apparent major negative effects in the regions where they are taking place; other have led to serious problems for millions of people, as for example the severe droughts in parts of Africa causing widespread famine there.

However, we should not become overly alarmed about these changes that are occurring. In his book The Weather Makers, one particular climate change expert--author Tim Flannery-- has mixed a wealth of interesting research and data on the subject of climate change with a number of major scientific, historical and logical errors. For example, Flannery presents incontrovertible evidence that our planet has been warming up over the past fifty years. But when it comes to the cause of this warming trend, Flannery places the blame squarely on increased human population and fossil-fuel activity and rules out all possible natural causes. In a related error, Flannery claims that the current warmup is without precedent in human history. Both of these flimsy myths can be deconstructed rather easily.

It is a well-accepted fact that the burning of fossil fuels produces greenhouse gases, which trap the Sun's heat in Earth's atmosphere and contribute to global warming. However, to place the blame for the current warming entirely on this process is incorrect. Earth's temperature does fluctuate slightly over periods of decades and centuries; these slight variations are natural, and have nothing to do with human activity or the lack thereof on Earth. For instance, in Medieval Europe, an Ice Age was followed by the Medieval Warm Period, during which Greenland was warm enough for Leif Ericson to establish colonies and plant vineyards there. This fact of the historical record, known to legions of schoolchildren, is casually dismissed by Flannery as "bunk." (p. 44)

It is obvious that natural causes must have been responsible for the Medieval Warm Period; the human population and burning of fossil fuels then were a fraction of their values today, and far too insignificant to affect the Earth's climate. And if this is so, then natural causes may be primarily responsible for the warm period we are currently beginning to experience. Flannery downplays the importance of such cause and effect relationships as "an unhelpful way of thinking." (p. 162)

Flannery's book is useful for the scientific research it contains on global warming, changes in Earth's climate, and the effects of both on various ecosystems (notably the Great Barrier Reef) during the last five decades. But its author fundamentally errs in attributing the warming entirely to greenhouse gases produced by modern human civilization, and ignoring natural causes altogether. After all, the greatest and most powerful natural influence on Earth's weather and climate is beyond our planet: the Sun itself. There is a strong correlation between recent changes in solar activity, observed and documented by astronomers, and changes in Earth's climate documented during the same period.

We should do what we can to take care of our planet, including reducing our pollution of Earth's atmosphere with greenhouse gases from fossil fuels, but at the same time we should be aware that Earth is going through a natural warming cycle that must play itself out regardless.
Posted by Justin Soutar at 11:52 AM