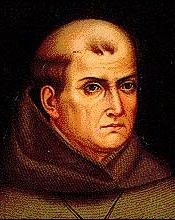 During an airborne press conference en route to the Philippines, Pope Francis revealed that he is going to canonize Blessed Junipero Serra, the heroic "Apostle of California," during his visit to the United States this coming September. What wonderful news! As a Catholic who was born and raised in California, I have been praying and looking forward to this for many years. As he has done with several other Blesseds who died in past centuries, Pope Francis has chosen to waive the normal requirement for a second miracle obtained through Father Serra's intercession as the condition of his canonization, allowing his cause for sainthood to proceed to its conclusion without further delay.

Father Junipero Serra, O.F.M. (1713--1784) was the humble and hardworking Franciscan friar who brought the Catholic faith to the native American peoples of California, thus laying the foundation for the state's Catholic culture that is still very much alive today. He was born and raised on the Spanish island of Majorca in the western Mediterranean. As a thirty-six-year-old priest, he answered God's call to become a missionary to the Americas. After some years of ministry with his fellow Franciscans in Mexico and Baja California, at the age of fifty-three he joined a Spanish expedition that headed north to colonize and evangelize California. There, with God's help, he accomplished what he is most famous for: the founding of the first seven of twenty-one California mission settlements, stretching along the coastline from San Diego in the south to slightly north of San Francisco. In addition to teaching the faith and baptizing thousands of native Americans, Father Serra and his fellow Franciscans developed and taught the people valuable techniques in construction, gardening, animal husbandry, agriculture, and irrigation. Although earthquakes and fires often undid years of hard labor within a few seconds or minutes and not all of the missions succeeded, a good number of them did prosper and some eventually developed into good-sized modern cities such as Los Angeles, San Diego, San Francisco, San Jose, San Luis Obispo, Santa Barbara and Ventura. The Spanish missions of the 1700s and early 1800s have left an indelible mark on the religion, culture, art, architecture, and economy of the Golden State. As a boy, my parents took my sister and me to visit many of them including Nuestra Senora de la Soledad, San Carlos Borromeo, San Miguel, San Luis Obispo, La Purisima Concepcion, Santa Ynez, and Santa Barbara.

Some two hundred years after his death, in 1985, Saint John Paul II declared Father Serra "venerable." That same year, in recognition of his remarkable achievements, the U.S. Postal Service issued a special 44-cent USAirmail stamp in Father Serra's honor, which featured a portrait of him centered between an outline of the California and Baja California coast on his left and the façade of Mission San Gabriel on his right. He was beatified by John Paul II on September 25, 1988. Later this year, thanks to Pope Francis, California will finally have its own patron saint and the Church will have another great missionary role model and intercessor for the New Evangelization.

Further information about Blessed Junipero Serra and the history of the California missions can be found in various books. I would also highly recommend the excellent EWTN TV documentary series on his life entitled "Serra: Ever Forward, Never Back" which was originally aired in November 2013 and was just recently re-aired.

Blessed (soon to be Saint) Junipero Serra, pray for us!
Posted by Justin Soutar at 12:21 PM