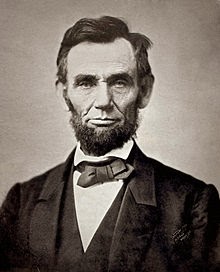 Today we Americans celebrated the birthday of Abraham Lincoln, one of the most respected and admired presidents in the history of our nation. Lincoln's greatness lay in his deep religious faith, his solid moral principles, and his honesty and integrity of character. Relying on these qualities, and with the aid of Divine Providence, he successfully guided our country through the stormy period of the Civil War, preserving the Union from disintegration and laying the foundation for a more just American society in which the civil rights of all human persons would be protected by law.

Lincoln knew that slavery was widely practiced and financially profitable, but he also knew that it was gravely unjust, and--for that reason alone--it had to be abolished. Deep within his heart and mind, he knew the truth about the evil of slavery, so he courageously spoke the truth about it and took concrete action as president to rid America of this social scourge. He was not a very good public speaker, but he spoke the truth and stuck to his principles. He did not compromise those principles for the sake of political advantage or out of fear of offending wealthy Southern slave owners. He did not surrender to discouragement over the difficulties he faced in attempting to eradicate an entrenched custom of southern American life. On the contrary, Lincoln stood firm in proclaiming the truth about the grave injustice of slavery and in his determination to make it illegal. At a time of national crisis, he put forth a vision for America of a re-united land in which every person born and raised would be a free citizen regardless of his or her race, skin color, or nationality. And that truth and that vision resonated with the American people, who sent Abraham Lincoln to the White House in 1860 and again in 1864. The results were the Emancipation Proclamation, which declared all slaves free; the Union's victory in the Civil War, which restored American unity; and the Thirteenth Amendment to the Constitution, which permanently outlawed slavery in the U.S. Although he paid the price of assassination for his courageous leadership and one hundred more years would elapse before his vision would be fully realized, Lincoln's legacy as a great civil rights pioneer and as a national hero is beyond dispute.

With his firm stand on basic principles of justice and natural law, Lincoln offers an encouraging role model for us twenty-first century Americans who are active in the pro-life, pro-marriage, and religious liberty movements of our own day. We who are fighting to protect the basic human rights to life and liberty and to preserve the traditional definition of marriage know that abortion is a lucrative business for those involved in it, that deviant sexual behavior has a certain appeal for those involved in it, and that the HHS mandate and ObamaCare are little more than government subsidies for large abortion, pharmaceutical, and insurance companies. But we also know that abortion and the HHS mandate are gravely unjust, while abortion and same-sex "marriage" violate the Creator's natural law, and--for those reasons--these three abominations must be abolished. We know the truth about these evils, so we must courageously speak the truth about them and take decisive action to rid our country of them. We must not compromise these principles for the sake of temporary political advantages or out of fear of offending radical secularists. And we must not surrender to discouragement by settling for restrictions on abortion or temporary court injunctions against the HHS mandate. On the contrary, we must stand firm in proclaiming the truth about the grave injustice and evil of abortion, homosexual "marriage," and the HHS mandate, and stand firm in our determination to abolish them. And we must put forth a vision for America of a land where every unborn child is protected by law; where marriage is always the union of a man and a woman; and where religious liberty flourishes. That truth and that vision will resonate with the American people, and notwithstanding predictable attempts to do them in, the three great civil rights movements of our time will ultimately achieve their long-sought victories.

Today, thanks to the godless and corrupt leadership of President Barack Obama, our nation is once again in grave crisis, more divided than at any time since the Civil War. We could use another president like Lincoln, a true leader--someone of deep Christian faith, solid moral principles, and honesty and integrity of character--someone who could unite and heal our country, someone who knows how to speak to people's hearts and articulate a clear vision for America. In a few months, I will offer my own endorsement for just such a candidate for president of the United States.
Posted by Justin Soutar at 10:44 PM