Pope Benedict XVI recently concluded the Synod of Bishops on the Middle East, a special meeting that was convened by the Holy See to discuss resolution of conflict in the Holy Land. Their final document, issued Saturday, as well as the Synod itself, have been attacked in some quarters for promoting anti-Israeli sentiment.

You need to read my book, America's Back-Door Enemy: Unmasking the Unknown Terrorists, to understand why this is happening. There is a small group of people in the United States and Israel who have been completely passed over in the War on Terrorism. 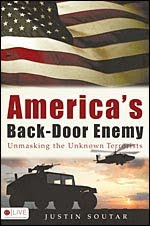 I found out who they are and what they are doing. Like Muslim terrorists, they are religious fanatics. However, they are more sophisticated, more powerful, better financed and more deadly than their Islamic counterparts. These unknown terrorists and their sponsors operate with impunity. They have no conscience and will stop at nothing to achieve their goals. And they are viciously attempting to destroy all hope for peace in the Middle East.

Well-researched and written in a clear, concise style, America's Back-Door Enemy lifts the lid on these heretofore anonymous enemies of the United States, Israel and the peoples of the Middle East.
Posted by Justin Soutar at 9:15 PM