Here is the latest from the Save Darfur Coalition: 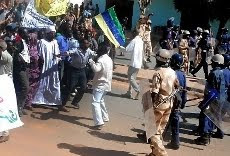 Intimidation, torture, and violence. Hundreds of activists, opposition party leaders and journalists arrested and beaten.
Welcome to election season in Omar al-Bashir's Sudan.
Sudan's first multi-party elections in 24 years are scheduled for April 2010. The elections were intended to serve as a capstone to the democratic transformation of Sudan promised in the Comprehensive Peace Agreement (CPA) that was signed by North and South Sudan in 2005. Instead, none of the conditions for truly free and fair elections are in place.
Bashir's regime has failed to: ensure freedom of association, movement, assembly and speech; limit the broad powers of arbitrary arrest, detention, search and seizure; end press censorship; allow equal access for all political parties to media; implement mechanisms to prevent election related violence; and allow unrestricted access for both domestic and international observation teams.
Not only are brave Sudanese who call for greater freedom being violently suppressed, the current conditions in Darfur make credible elections there inconceivable. Random attacks on civilians continue, movement of UN peacekeepers is restricted, and millions of Darfuris who live in displacement camps worry that participation in the election will lead to denial of their right to return to their homes. Any national election that does not include Darfur cannot be viewed as legitimate.
So what is the benefit of elections for Bashir's genocidal regime? They are a means to give it a veneer of legitimacy.
And without scrutiny by the Obama administration and the international community, the elections will deliver the sort of legitimization that Bashir desires.
This is why it is critical for the U.S. government to shine a spotlight on the fact that the political freedom necessary for free and fair elections in Sudan does not exist. We need President Obama and our elected leaders to send a message to the world that they will not recognize the results of an illegitimate electoral process, and will not permit a fugitive of the International Criminal Court to legitimize his brutal dictatorship.
Over the coming months we will need your help to make sure that our leaders do not let the upcoming elections provide legitimacy to Bashir's government. We will be collecting signatures, organizing lobby days and local events, blogging, and raising awareness through the media and social networks.
The people of Sudan need our support. Spread the word to your friends and family and encourage them to learn more.
Sincerely,
Mark Lotwis
Save Darfur Coalition
Posted by Justin Soutar at 4:46 PM